Twitter has finally earned its advertising stripes. Take a look at your Twitter page, and you’ll notice a brand new little bar sitting just under your follower stats. That is an advertisement. Twitter has previously said it hates the usual banner advertising methods, and would only run ads that were innovative. Now these ads are quite small, and each one we’ve seen ties in with Twitter in some way. What do you think – has Twitter sold out? Or was this advertising armageddon inevitable? 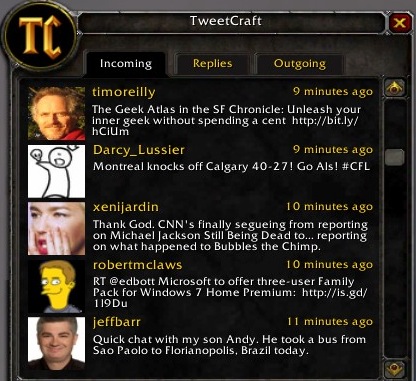 Grinding on Orcish shores? Tweet about it. Stalking low-level noobs? Tweet about it. Dancing outside Stormwind with no clothes on, a bevy of beautiful night elf priestesses fondling your lvl 80 gear? You should certainly be tweeting about that – and now you can. World of Warcraft has finally received its very own in-game Twitter client, TweetCraft. It lets you send and receive tweets, send screenshots and auto-tweet when you login, enter an instance or get an achievement. More info, here. 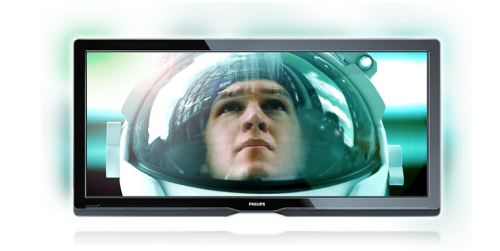 Philips is having some sort of competition, and it’s using Twitter to drum up support. The competition involves trying to create the best viral video in the world, advertising Philips 56in 21:9 cinema screen. The competition is worldwide, and all you need is a Twitter account to get involved. Just follow Philips_vs, and tweet ideas for your viral.

We’ve got one: Chuck a cinema screen off the Burj Dubai and film it smashing in slow motion – then have the screen pan out, and the slo-mo video is  being displayed on a Philips Cinema screen. What do you think?

Posted on April 5, 2009 by Thomas Shambler | Leave a comment

Or are they? The internet is awash with unconfirmed rumours about whether the internet giant is on the verge of assimilating the micro-blogging site into the Googlesphere. TechCrunch has two sources reportedly close to the deal, who say Google will pay well over the US$250 million valuation. This comes after a six-month acquisition diet from Google, so we reckon it’s plenty hungry by now, and with nearly US$16 billion in cash and securities lying around, they can afford the social-networking feast of the century. We’re not sure if the two sites will play nice together, but we imagine a Twitter seach that lets you find out exactly what your friends ate for lunch last week.

‘What? Sam and Tony both ate a cheese sandwich last Tuesday? What a coincidence! My life is so much better now I know that!’

Posted on April 5, 2009 by Thomas Shambler | Leave a comment

Adding to the growing list of things Twitter can do better than you can, BakerTweet will tell you when your favourite blueberry muffins are fresh out the oven. The most basic of computer hardware is synced up via Wi-Fi, so your baker just needs to turn a knob sending tweets to the carb hungry masses. It’s currently being trialled in London’s Albion Cafe, with tweets like this one: ‘Bouncy, beautiful cup cakes, nice and iced, plump, and ready for your delight. come and get ’em.’ We don’t see how it can fail.

The magnanimous Kevin Rose (yeah, the one who created Digg – see @kevinrose) has come up with cunning plan to enable the Twitterati to post (and reply to) lonely-heart style ‘tweets’. In only two 140 character posts he has managed to launch aTwitter-based love fest – all by utilising the power of searchable hash tags (#sman and #swomen). Twitter is now fluttering with single social networkers desperately seeking each other. We at Stuff think this (seemingly selfless) act from Mr Rose is inspired, but worry that this could spell yet another unwarranted UAE ban for a site most people use for culturally-appropriate purposes.

Okay, Twitter. We know you’ve just turned three years old. We know that you’ve been giving us followers and tweets unselfishly for free these past years, and you deserve a little payback. Even if it is in the form of advertising ExecTweets, a tweet aggregator for business execs. The service is from Federation Media and Microsoft, and it appears just below the user name on profile pages (only in the US and UK for the moment). All it does is follow several high profile exec’s tweets. For example, Marisa Thalberg (big shot digital marketing executive for Estee Lauder) has this to say, “Contemplating: is the (often thought to be feminine) trait of being a “pleaser” a strength in business or a detriment? Or both?” Hmm. That’s very thoughtful Marisa, thank you for that.