Our frag-happy pals at MEGamers posted a link to a mysterious new video of an FPS depicting Dubai as a sandy post-apocalyptic wasteland, complete with cameos of Emirates Towers, the Burj Al Arab and the Burj Dubai.

We’ve contacted our sources at 2K Games (who are allegedly publishing the game) for an official response, but as yet have received no word.

In the meantime head over to MEGamers to check out the video and wonder along with us what the PR implications for our fair city will be.

This region already has a fair amount of luxury-loving petrolheads, but there’s still room for one more. Enter Mclaren, the performance car maker better-known for its Formula 1 racing:

The Middle East is on track to host McLaren Automotive’s first regional retail network, bringing to the market what is expected to be one of the world’s most desirable cars. The new range of high-performance sports cars will share the same headquarters that today hosts over 50 years of McLaren motorsport and performance sports car heritage, from Bruce McLaren’s 1954 Austin 7, to the record-breaking and legendary McLaren F1 road car of the ‘90s, and the most successful supercar ever in its price bracket, the Mercedes-Benz SLR McLaren.

McLaren hopes to have moved in by 2011, the same time it’s due to release its next-gen supercar. That gives you a little time to start saving then, these cars don’t come cheap.

Samsung’s been teasing us all month about a secret mobile launch, complete with count down clock. But the wait is over. Tonight, the phone will be unveiled in three launch locations around the world, Dubai, Singapore and London. The mobile’s been kept under wraps, as far as we know, and the usual internet rumour murmers have been rather quiet on this one. Smart money is on the I7500, Samsung’s Android-running handset, or a new mobile running an updated version of Sammy’s TouchWiz OS. We’ll be at the event later tonight, more news when we have it. 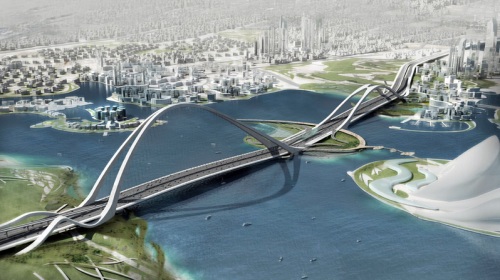 By 2012, the sixth crossing along the Dubai creek will be tallest and longest arch bridge in the world. It will be over 1.5km long and 205m high, have 12 lanes of traffic, cost 817 US$1 million and carry more than 2,000 vehicles per hour in each direction. According to Sudhir Jambhekar, Senior Partner at New York architecture firm FXFOWLE International, ‘the bridge’s design was inspired by multiple sources, each evoking similar imagery – the rhythmic grace of Dubai Creek’s current, the elegant splendor of the sand dunes adjacent to the City, the lighting patterns of the lunar cycle and the design of the future Opera House.’ Fantastic, Dubai could do with a bit more construction work right now.

[via io9 and World Architecture News]

Shopping: boring. Flying a Boeing 777: probably like driving a bus if you’re a pilot. But if you’re not, you might like to get yourself behind the flight deck of the free Etihad flight sim at Dubai’s Ibn Battuta Mall. Hurry now – it’s only there from today until Friday. And training managers will be on hand to help. Plus, possibly, terrorist squad feds.

Sandviper is perfect for dune bashing 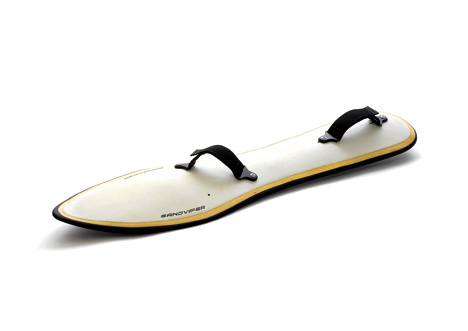 If its not toast-making alarm clocks or finger powered MP3 players, the lads at Yanko Design are dreaming up new ways to traverse the deserts of Dubai. Looking at sandboarding, the boys have created a board that meets the special conditions sliding on sand creates. The Sandviper has a wide front area and narrow back for aggressive maneuvering, with a raised top side to stop sand gathering. Realizing that people fall over, designer Marc Bischoff made it easily repairable with replaceable plastic ‘socks’ on the board’s under side. Now all you need is a mask (sand in the eyes can be nasty) and you’re all set. 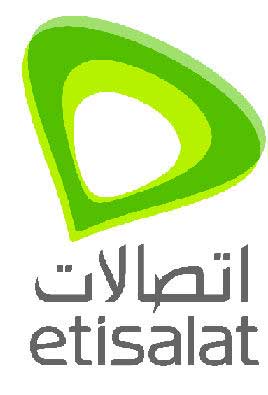 Fibre to the home (FTTH) may sound like door-to-door carpet sales, but it’s actually the D’s Bs of connectivity. Super fast (100Mbps) optical broadband makes it the perfect gateway for HD video-on-demand, IPTV and online gaming. UAE telco Etisalat has announced that Abu Dhabi will be fully hooked up with FTTH by the third quarter of this year, with Sharjah and Dubai to follow. The whole country is expected to be hooked up by the end of 2011. Time to reconsider VoIP policies?